Blocked dryer vents are known to cause a multitude of issues that reduce efficiency and increase electricity consumption. These situations are often due to the tubing or exhaust pipes being shaped or bent, curled, straight, or crimped.

In addition, lint can also block the pathway and even ignite a fire if it rubs against statically charged surfaces. Even worse, pests can find a suitable environment to live and thrive in because of the warmth.

While all this is happening, the dryer vent can become clogged, making it inefficient. With the right tools, you can fix your blocked dryer through a simple process.

In this discussion, we will walk you through a complete guide on blocked dryer vents and how to clean them.

Dangers of a Blocked Dryer Vent

Dryer vents are prone to problems resulting from the lack of maintenance. Generally, you shouldn’t wait until the dryer vent is clogged before cleaning it. Often, periodic and preventive cleaning by a professional is essential.

Statistics show that clogged dryer ducts are the leading cause of home fires. Lint usually forms and prevents hot air from escaping the unit.

As a result, the hot air builds up in the vent, causing the element to overheat. Eventually, the hot element may explode and dissolve into smoke.

In addition to a fire, a clogged dryer can lead to other problems such as carbon monoxide buildup, inefficient operation, and shortened lifespan of the dryer.

Signs that the Dryer Vent is Blocked

The first sign of a blocked dryer vent is when it doesn’t dry clothes as it should. This problem arises from the accumulation of lint in the duct which can stop the escaping of hot air from your machine.

If the vent is not cleaned at this point, the problems with dryer operation can quickly worsen.

Another sign is dryer fatigue, which indicates that your unit loses efficiency. This can lead to higher utility bills as the vent struggles to expel hot air.

Step by Step Process of Cleaning a Blocked Dryer Vent

It is essential to have everything ready before you start cleaning up. You can find most of these tools in hardware stores.

For the first steps, you will need the following items.

If the duct is short, you can clean it yourself with a vacuum cleaner. However, if an elaborate duct extends from the basement to the roof of a multi-story building, you may need a professional cleaning service.

You must first unplug the device from the electric outlet and move it away from the wall to get started.

Next, disassemble the duct from the dryer and gently pull the clamp. You can also use a screwdriver to loosen the screws.

Check for lint accumulation in the duct opening and dryer outlet. Remove the lint with a lint brush.

For this, we would recommend the Holikme Dryer Lint Vent Brush as it is smooth and can remove lint from the exhaust vent and dryer gap efficiently.

Also, the brush is long, sturdy, and has thick bristles that can effectively remove all lint.

Alternatively, you can buy a complete dryer vent cleaning kit that comes equipped with everything you need for the task.

Smart House Dryer Vent Cleaner Kit has a nylon lint brush and drill attachment for hooking to a power drill for effective cleaning. The brush has a long and flexible rod that can reach tight areas of the vent.

Next, go to the outside of the house and remove the vent cover from the outlet. Remove the debris from within the duct using your hand.

After that, the next step is to vacuum the pipe using the canister vacuum cleaner. Push it down the hose as far as it can go.

You can also attach the lint brush to a power drill to clean the bent areas of the vent.

For areas you can’t reach, you can use the lint leaf to blow out the lint. For this, we recommend the Zinnia Cordless Leaf Blower.

The main reason we choose this equipment is that it’s portable and uses both electric and battery power. Therefore, you can use it on the vent outlet on the outside to blow out the lint.

After the cleaning, some lint may collect near the vent outlet, you can use the vacuum cleaner to remove them.

For stubborn lint build-up, use a dryer vent auger which is a flexible piece of equipment with strong bristles that grab the lint and dirt. We suggest the Vanitek Auger Lint Remover for this task.

The auger is sturdy and can clear lint in vents not exceeding 25 feet.

Step 6 – Put Everything Back!

At this point, the vent should be clean, and all the lint cleared. The last step is to screw back the vent cover on the outside outlet. Next, reconnect the vent duct to the dryer and push your machine towards the wall.

Finally, reconnect the power supply and test whether your machine is now blowing air effortlessly.

At the very least, blocked dryer vents hinder your machine from working efficiently. Further, your clothes will take longer to dry which can cost you a lot of money.

Because blocked dryers work extra time due to ineffective exhausting, their lifespans are gradually shortened. For this reason, it’s vital to clean the vent at least once a month and have a maintenance schedule in place to prevent future problems. 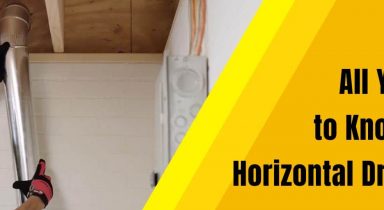 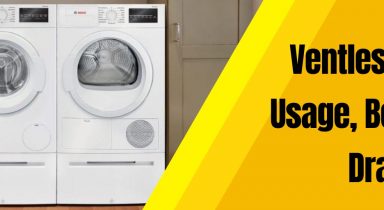 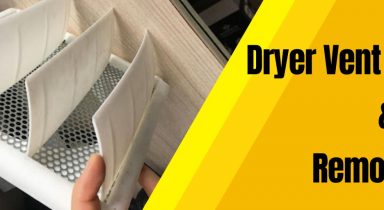 Dryer Vent Screens – What They are & How to Remove Them